Human astrovirus (HAstV), together with rotavirus and calicivirus, is considered to be a common cause of acute gastroenteritis in infants, which is a relatively mild rotavirus enteritis with symptoms of diarrhea, vomiting, and abdominal pain that usually lasts for several days. HAstV infection is usually self-limited and seems to be mainly confined to epithelial enteric cells, but it can also spread systematically in immunocompromised patients and lead to severe infections.

HAstVs belong to the genus Mammastrovirus of the family Astroviridae. Based on the reactivity of capsid proteins with polyclonal sera and monoclonal antibodies, astroviruses are classified into serotypes. The number of viral structural proteins seems to vary with serotypes, with 1-3 of human viruses reported. Astroviruses can also be divided into genotypes based on the nucleotide sequence of the 348 bp region of the genome. It has a good correlation with serotype. There are eight defined genotypes called human astroviruses 1-8 (HAstV1-HAstV8), and several newly described astroviruses. Among them, HAstV1 is the main strain worldwide.

HAstV is an icosahedral, non-enveloped virus with a diameter of 28-35 nm that have a characteristic five- or six-pointed star-like surface structure. Its genome is composed of plus-sense, single-stranded RNA. This RNA genome has three open reading frames (ORF1a, -1b, and -2), encoding three polyproteins. After synthesis of polyadenylated subgenomic RNA (sgRNA), a structural polyprotein with approximately 780 amino acid residues is produced by ORF2, and this gene is 3' collinear with genomic RNA.

The polyprotein is 90 kDa (VP90), which is cleaved at the intracellular residue Asp-657, producing a smaller 70 kDa protein (VP70), which is present in the extracellular particles. The particles composed of VP70 are immature and require trypsin cleavage. Trypsin occurs outside the cell through a rather complicated pathway, producing highly infectious particles. In this process, three final polypeptides were produced: VP34 derived from the N-terminal domain, and VP27 and VP25 partially overlapping and derived from the hypervariable region. Neutralizing antigenic determinants are located in this region, but have not been precisely located. 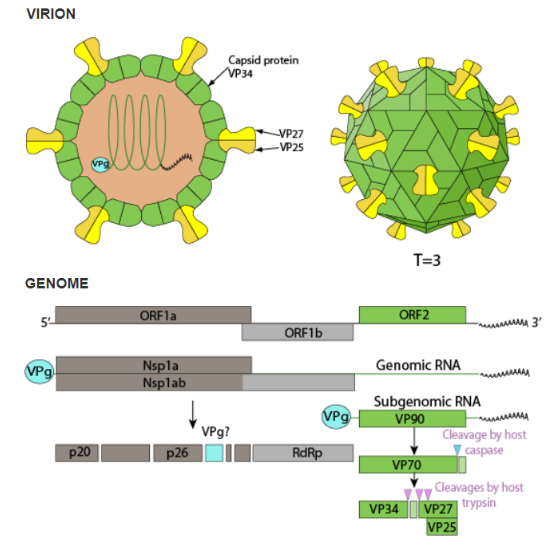 There is no vaccine or anti-viral treatment against the Astrovirus infection and has a very high mutation rate. Despite the medical importance of HAstVs, the study of these pathogens has been ignored. In order to better understand the antigen structure of astrovirus and the basis of protective immunity, Creative Biolabs provides a large number of Anti-HAstV antibodies for hot targets to meet the needs of customers. For special HAstV antibodies, our expert team has the ability to provide comprehensive services for specific project needs, including ViroAntibody discovery, ViroAntibody engineering, ViroAntibody customized and ViroAntibody neutralization assays services. If you are interested in our anti-HAstV antibody products or services, please feel free to contact us for more details.