Creative Biolabs is confident to provide our customers with the most reliable and cost-effective ViroAntibody to facilitate their valuable viral disease research and project development.

The viral infection process approximately consists of five stages in the host cells: attachment, penetration, replication, release. In the stage of replication. Viruses according to the Baltimore classification (BC) employ different replication strategies respectively.

Most DNA viruses replicate inside the host cell nucleus and utilize host cellular machinery for their reproduction. Upon entry into the cell, the double-strand DNA (dsDNA) is transported to the nucleus and utilizes host cell polymerase for their replication. The dsDNA can replicate to produce viral dsDNA or serve for mRNA transcription to produce more polyprotein. In the case of single-strand DNA (ssDNA) viruses, the mechanism is the same as dsDNA except for the process in which ssDNA is transcribed to dsDNA and then replicated to produce viral mRNA inside the nucleus.

In RNA viruses, the process is more complex. The type of RNA they possess (dsRNA,+ssRNA, or -ssRNA) determines whether they are transcribed, translated, or replicated upon viral entry into the host. In the case of dsRNA and -ssRNA they have to synthesize the viral +ssRNA and mRNAs to be recognized by host cell machinery. For this purpose, they encode their own RNA-dependent RNA-polymerases (RDRP).

ssRNA and dsDNA retroviruses which replicate via DNA/RNA intermediates use a different mechanism for replication. dsDNA viruses upon entry into the host are transported into the nucleus and utilize host cell machinery for translation. Upon assembly of virus particles into virions, the reverse transcription occurs which converts RNA to RNA/DNA complex which is then reverse transcribed to circular dsDNA by viral RNA dependent DNA polymerase (reverse transcriptase). In the case of ssRNA retrovirus, ssRNA is reversely transcribed to dsDNA inside the virion upon cell entry which is then transported to the host nucleus for integration and transcription.

Viruses have three main mechanisms of variation. Any of the three mechanisms may result in viruses that have new biological properties, such as a new host range and pathogenic potential. 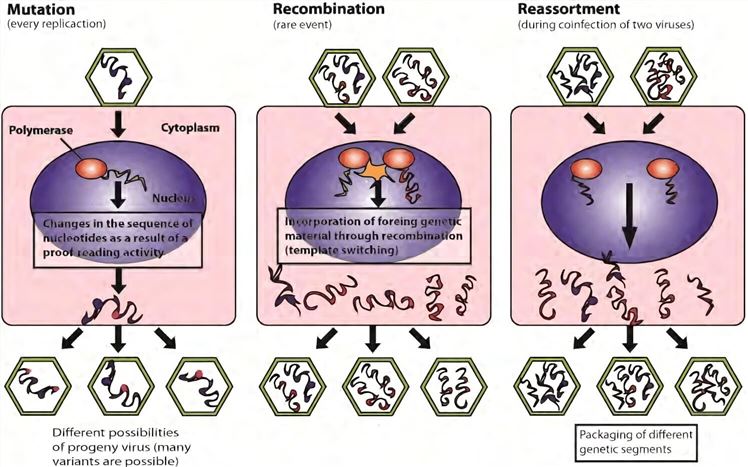 Creative Biolabs is a long-term expert to offer the antibody service for therapeutic and diagnostic development. Our scientists are confident in providing our customers with the most reliable and cost-effective ViroAntibody to facilitate their valuable viral disease research and project development. In addition, we also provide personalized solutions, including ViroAntibody discovery, ViroAntibody engineering, ViroAntibody customized and ViroAntibody neutralization assays services. Please feel free to contact us.