Fig.1 A schematic diagram of the WENV genome. 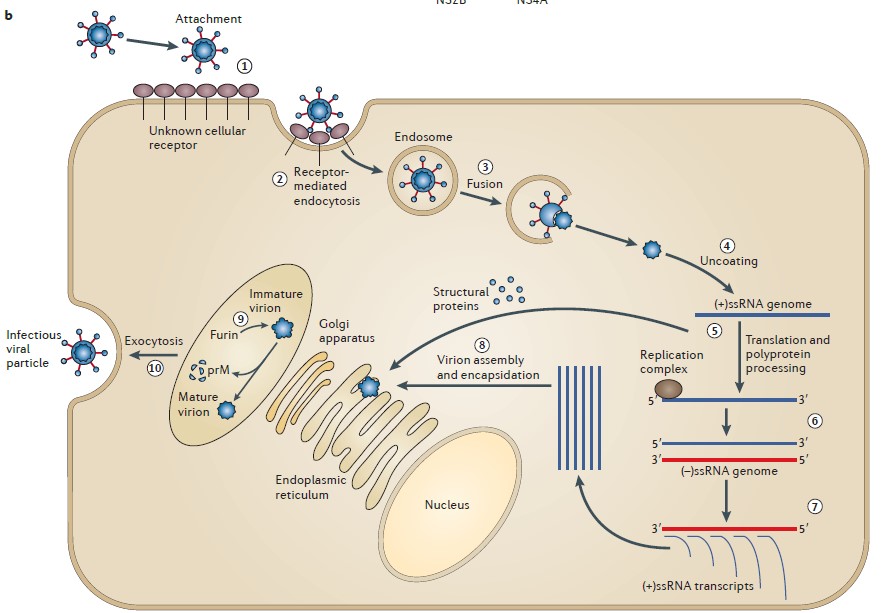 West Nile Virus (WNV) is one of the major leading causes of mosquito-borne disease. WNV is most commonly spread to people by the bite of an infected mosquito. Cases of WNV occur during mosquito season, which starts in the summer and continues through fall. There are no vaccines to prevent or medications to treat WNV in people. Fortunately, most people infected with WNV do not feel sick. About 1 in 5 people who are infected develop a fever and other symptoms. About 1 out of 150 infected people develop a serious, sometimes fatal, illness.

Structure and Genome of WNV

The viral C protein is approximately 30 nm in diameter and consists of C protein dimers, the basic component of nucleocapsids, with the RNA binding domains located at the C- and N- termini separated by a hydrophobic region. The hydrophobic regions of the C dimers form an apolar surface which binds to the inner side of the viral lipid membrane.

prM is the only viral peptide matured by host furin in the trans-Golgi network probably to avoid catastrophic activation of the viral fusion activity in acidic Golgi compartment prior to virion release. prM-E cleavage is inefficient, and many virions are only partially matured. These uncleaved prM would play a role in immune evasion.

The E proteins are organized in 3 domains connected by flexible hinges, domain I (DI), domain II (DII) and domain III (DIII). DI is positioned at the central portion of the protein, linking together the other two domains. DII is a long domain that forms an internal fusion loop which is necessary for flaviviral fusion. DIII is an immunoglobulin (Ig)-like fold that is thought to participate in interactions between virions and host factors associated with virus entry.

In contrast to other RNA viruses, such as human immunodeficiency virus (HIV) and influenza, WNV exhibits a high degree of sequence conservation in its natural reservoir. Such sequence conservation makes WNV a promising target with regard to targeting humoral and cellular immune responses to conserved epitopes. Monoclonal antibody (mAb) has many advantages such as targeting to a single epitope, high specificity, stable passage, large-scale manufacturing and extensive applications in basic research, medical diagnosis, and tumor therapy. Armed with advanced technology, Creative Biolabs now provides anti-WNV mAbs as well as polyclonal antibodies (pAbs) products for research use. We can also provide a full comprehensive suite of secondary antibodies and isotype controls to meet your needs. Flexible customized solutions are available according to customer’s requirements.

Learn more about our ViroAntibody Discovery Services. Please feel free to contact us for more information.