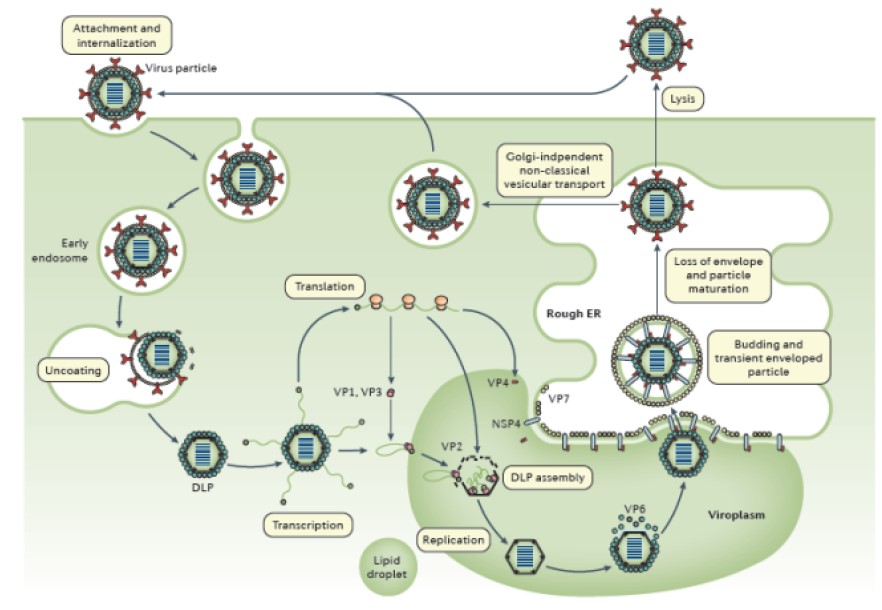 Rotaviruses, representing the primary pathogens responsible for acute dehydrating diarrhea in children under the age of 3, are non-enveloped, double-stranded, RNA viruses belonging to the Reoviridae family. The mature, infectious, rotavirus particle, 100 nm in diameter, is an icosahedral, triple-layered particle (TLP) containing a genome formed by 11 segments of double-stranded RNA that code for 12 proteins, including six structural (VP1, VP2, VP3, VP4, VP6, and VP7) and six non-structural (NSP1-NSP6) proteins.

The inner layer is composed of VP1, VP2 and VP3, which are associated with the viral RNA. This core is surrounded by the middle protein layer, which is composed entirely of VP6, the antigen that defines group and subgroup (SG) specificities. The outer capsid layer consists of the VP7 (G-types) glycoprotein, in which VP4 (P-types) spikes are embedded. The two outer capsid proteins carry rotavirus serotype (neutralization) - specific antigens and are encoded by segments 4 and by segments 7, 8, or 9 depending of the serotype and strain. As the VP4 and VP7 proteins are encoded by separate gene segments, rotaviruses can generate new P-G serotype antigen combinations through re-assortment after dual infection of single cells.

Rotavirus has three important antigenic specificities: serogroup, subgroup and serotype. At present, seven serogroups (A to G) of rotavirus have been identified, of which, groups A, B and C infect human. Human group A rotavirus that is the dominant (>90%) rotavirus serogroup can be classified into four antigenic SG specificities based on VP6 reactivity with monoclonal antibodies (mAbs). Group A rotavirus are traditionally classified in serotypes by virus neutralization assay, using mAbs against VP7 (G-serotypes) and VP4 (P-serotypes). The most common G serotypes found worldwide are G1, G2, G3, and G4 and the most common P serotypes are P1A, P1B, P2A and P2B. 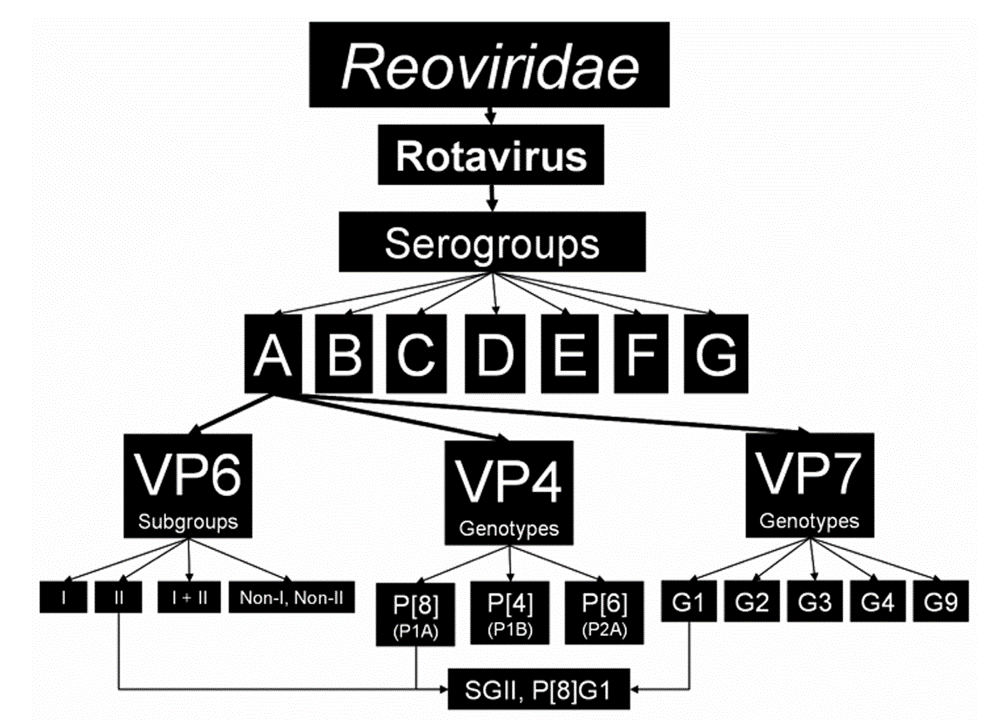 Outer capsid proteins VP4 and VP7, inner capsid VP6 and core VP2 are widely studied targets. Among them, the most frequent human B cell response is directed to the internal protein VP6. Protective and neutralizing antibodies induced in animals or humans following a rotavirus infection classically are thought to be directed against VP4 and VP7. At present, Creative Biolabs offers ready-to-use catalogue and mAb development services in various species with guaranteed success based on standard endpoints or customer's specific applications. Our high rate of success, short turn-around time and affordable cost are due to our proprietary hybridoma technology, state-of-the-art, specific pathogen free (SPF) facility, extensive experience in antibody production and flexibility to suit our customer's needs. A full comprehensive suite of primary antibodies, secondary antibodies and isotype controls are supplied to meet your needs. If you are interested in our products or services, please contact us for more information.