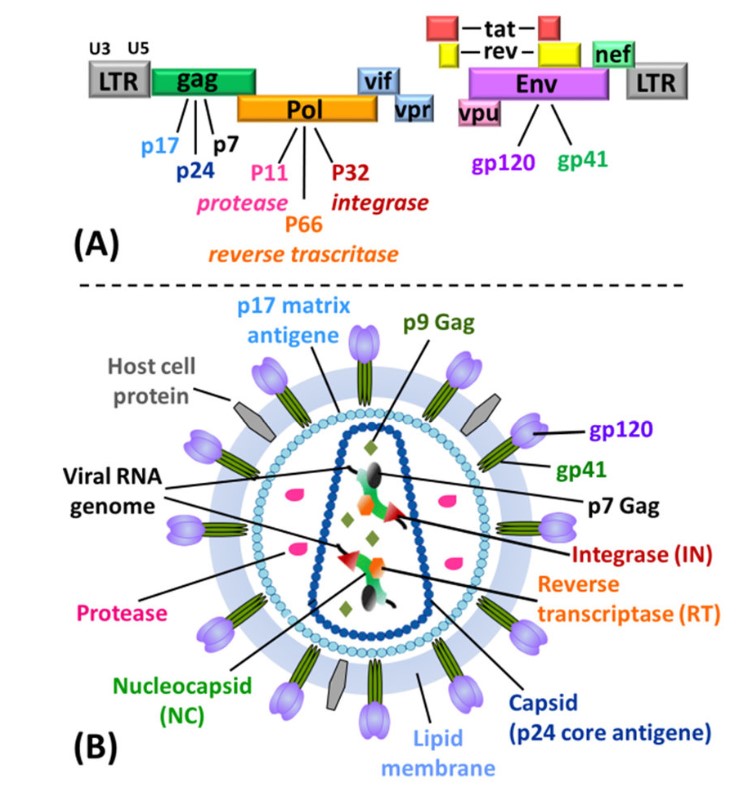 Fig.1 HIV genome (A), structure of a HIV virion particle (B).

The human immunodeficiency virus (HIV) works by attacking the human immune system. HIV cannot replicate on its own, so in order to make new copies of itself, it must infect cells of the human immune system, called CD4 cells. CD4 cells are white blood cells that play an essential role in responding to infections in the body. CD4 cells are killed by HIV and the body’s ability to recognize and fight some types of infection begins to decline. If HIV is not controlled by treatment, the loss of CD4 cells leads to the development of serious illnesses.

HIV-1 and HIV-2 are the causal agents of Acquired Immune Deficiency Syndrome (AIDS). While similar in many ways, a significant amount of data suggests that HIV-2 is less virulent than HIV-1. In fact, HIV-2 infection is characterized by low and frequently undetectable viral loads and a slower course to AIDS. The majority of HIV-2-infected patients can be classified as long-term non-progressors or elite controllers.

HIV has been the subject of intense investigation for many years. A great deal has been learned about how the retrovirus infects cells, replicates, and causes disease. HIV may be considered as a molecular entity consisting of 15 proteins and one RNA. The retroviral genome is encoded by an ∼9-kb RNA, and two genomic-length RNA molecules are also packaged in the particle.

Substantial progress has been made toward understanding the function of each protein, and three-dimensional structures of many components. The HIV genome encodes a total of three structural proteins, two envelope proteins, three enzymes, and six accessory proteins. As shown in Figure 1, the HIV-1 genome encodes nine open reading frames. Three of these encode the Gag, Pol, and Env polyproteins, which are subsequently proteolyzed into individual proteins common to all retroviruses. The four Gag proteins include matrix (MA), capsid(CA), nucleocapsid (NC), and p6. The three Pol proteins, reverse transcriptase (RT), protease (PR), and integrase (IN), provide essential enzymatic functions and are also encapsulated within the particle. The two Env proteins, glycoprotein 120 (gp120, SU) and glycoprotein 41 (gp41, TM), are structural components that make up the core of the virion and outer membrane envelope. HIV-1 encodes six accessory proteins, three of which (Vif, Vpr, and Nef) are found in the viral particle. Two other accessory proteins, Tat and Rev, provide essential gene regulatory functions, and the last protein, Vpu, indirectly assists in assembly of the virion.